Amid the prolonged political instability and financial difficulties, Ukraine’s economy is demonstrating the hidden potential and distinct signs of recovery.

This gives us the reasons to assume, that the country is slowly coming back onto the radars of foreign investors, with upcoming deregulation and institutional reforms contributing to the overall economic upturn.

Read more in our latest Newsletter 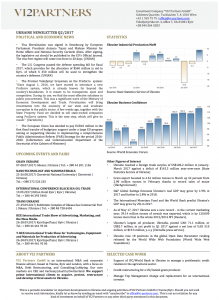 Jun
01
The reality show in the White House continues. Between family members selling US visas to China, Ivanka cashing in 100 Million USD for a so far unknown foundation while her husband is closing a huge arms deals with the same clients, and the President practicing sword dance, the post WW II order is eroding faster than the Larsen C Shelf in the Antarctic. In between we learn, that the Real Donald is giving away his Real Phone Number to other heads of states, talking openly about the locations of nuclear subs, handing out Israeli intelligence to the Russians (while keeping European allies in the dark) and looking for communication back channels with nations suspected of hacking and influencing US elections.
Washington rumors are spreading, that the producers of House of Cards are increasingly annoyed, as viewers get bored with second class intrigues and plays of Frank and Claire Underwood, and are demanding instead bodycams and live streams from the West Wing of the White House. Netflix would love to negotiate with the Trump family on the licensing rights, and the “Trump First – All Others are Fake” movement could make another great, fantastic deal, creating millions and millions for the family, doing such a tremendous job for the country. Future tax benefits for the ultra rich need to be good for something.
But, serious. This US presidency, which could have been indeed a great opportunity for the US, is turning into an absurd theater with collateral damage beyond any imagination. Other Western leaders are starting to move from utter disbelief into open opposition and strategic re-orientation of their countries, not willing to embark on the twitter based America Only adventure at the cost of their countries and taxpayers.

7 days in office – who will call the bluff? | alt-think.com

Since our last contribution on US developments „7 days in office- who will call the bluff“ the White House Adhocracy has trumped all expectations:
Well the good news is, that populist movements in Europe are losing ground fast with every statement and action of Trump. He is also the single most important factor for faster European integration. The bad news is, that we can expect more and worse statements and actions, before this chapter of American history will be closed (and do not expect it to happen fast). By scrapping international agreements and contracts and focusing on a purely competitive win-lose approach in international politics, the US will lose its credibility as a reliable partner and as a global leader, opening the field for other players to fill this void. Nobody can tell today, to what this will lead.
The probability for a (successful) impeachment is very low, given the rightful constitutional hurdles for this process in the absence of a smoking gun fired by Trump. But, the bluff will be called more and more by the press, the FBI and the intelligence services; and of course Little Marco and Johnny Walker Mc Cain are always in to start a DUMP DUMB TRUMP campaign. As this will start nagging and hurting more and more, with a tsunami of news from special investigators, senate committees and administration insiders, there might be a case for a face-saving (reason to be found) resignation of the President. Or, we might experience the Real Donald starting a Real war on the Korean peninsula. He would not be the first to cover problems at home with escalation abroad. The probability of this scenario, unfortunately, is going up. Watch out, we are moving rapidly into unknown and turbulent waters.
State of the Nation Comments Off on DUMP DUMB TRUMP – Admittedly A European View