Sep
20
Sunday evening Angela Merkel will have won parliament elections in Germany for a fourth consecutive time and start her fourth term as German Chancellor. It sounds paradox, but it is true, that she is longer in office than the World is using Apple iPhones and a generation of young Germans do only know her as the leader of Germany. Yet, in a world where twitter-man is hitting at rocket-man, and BoJo is not the name of a reality-show porn star, but of her Majesty’s foreign minister, the German „Mutti“ is a welcome deja-vu experience.
While narcissist and lunatic leaders are willing to steer our planet rapidly into chaos, her lack of ego and need to shine, and her sober approach to slow but steady problem and conflict solving have given her a unique political sex appeal, which will not only be honored by voters on Sunday but is recognized by political friends and enemies alike. Here are the main reasons for her seemingly un-ending success, which should become a case-study for the handbook of political leadership:
However, starting her fourth and most probably the last term as the leader of the biggest European country and economy (even Germans might eventually grow tired of her after 16 years), there are four major topics that she will need to address actively to build a lasting legacy:
In a world filled with war-mongering, arms and drugs proliferation, hate speeches, nationalist tendencies, extreme technological progress, and change, it would be great, if a nation, that has put the World into misery and ashes in two world wars, could act as an anchor for stability and peace. Merkel is the right person for this task. For Germany, Europe, and the World. Therefore good luck for Angela on Sunday and a lucky hand in ruling Germany for the coming four years. The World is in urgent need of stabilizing elements.
State of the Nation Comments Off on MERKEL, MERKEL ÜBER ALLES!

VI2 Partners is sharing with you the latest newsletter on recent developments in Ukraine and a snapchat of political and economic events in Q3 2017.

Summer was rich in both economic and political highlights. Ukraine started recovering from the crisis triggered by the political turmoil of 2014, the national currency is getting stronger, Ukrainian state-owned companies are finally reporting sufficient surplus with Naftogaz Ukrainy, Ukrenergo, Ukrainian Sea Port Authority, Ukrhydroenergo being among the most profitable state-owned assets (SOE) in 2016, according to the Top 100 SOE report prepared by the Economic Development and Trade Ministry.

Last but not least, Moody’s upgrading the outlook for Ukraine from stable to positive contributed to the overall positive dynamics and virtually serves as the best confirmation of the existing and upcoming positive changes.

Read more in our latest Newsletter 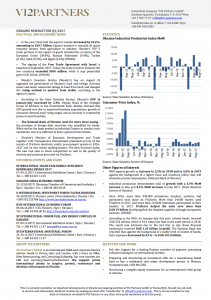