The civilized world must change thinking!

Dec
20
Not all President-elect Tweets in the past have proven so spot-on as the one, Donald Trump tweeted yesterday following the presumably islamistic terror attack on a German christmas market in Berlin, and further terror attacks in Istanbul and Zurich the very same day.

Today there were terror attacks in Turkey, Switzerland and Germany – and it is only getting worse. The civilized world must change thinking!

The civilized world must change thinking!
He could be right. By now, we know the symbolic public and state procedures that have followed similar attacks in Paris, Nice, Brussels, Istanbul and elsewhere: We condemn the attacks, we stand in solidarity with the families of the victims and the traumatized cities, we vow to protect our open societies and democratic values, we will not allow terrorism to influence our daily behavior and we will make intelligence and security services around the globe co-operate more closely.
But is this really enough? Debatable.
The real danger that we face today is, that by applying a too soft and open view on the terrorist threat, we will undermine the very basis of our democratic systems: the monopoly of power of the state in combination with the state responsibility to protect our safety. In case that a democratic Government cannot render this guarantee, people will start to go for the extreme. And select a leader who can deliver on the process without any compromise or as a Philippine citizen had put it yesterday: Duterte (President of the Philippines) is bad for human rights, but the people can walk safely in the streets again. The problem with these leaders is that once they are unleashed, it is very difficult to tame them back.
In order to find a cure for the current threats, we have to first face the ugly face of reality, throwing all political correctness overboard. Do not start the blame game of past events, actions or political decisions, but simply take a clear view of the current situation:
Accepting these truths, one can work to find and execute a cure, for which logically there have to be the following cornerstones:
[Preamble]
The objective must be total eradication and fight on all fronts. Half-hearted responses will not work.
Although helpful in the long-term it does not help now to talk about development aid or peace initiatives for crisis regions. The enemy has already arrived and moves within our societies, as all terror attacks in the past have painfully proven. We need to act in our countries.
State of the Nation Comments Off on The civilized world must change thinking!

2016 could be regarded as a year of political and economic consolidation for Ukraine. With the ongoing Ukraine/Russia conflict posing a threat to the future development as well as the new US policy towards the given conflict being yet to forecast, there are definitely plenty of positive signs on Ukraine’s political horizon. We will share quarterly information on the developments in Ukraine in our new UKRAINE NEWSLETTER section. 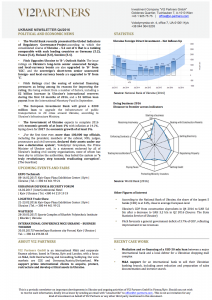 Please see the Pessimism Report 2017, as it was published today on bloomberg.com . They had forecasted for 2016 the Trump Triumph and the Brexit. Chapeau. A little bit dark to read, especially as most of the events described are not entirely unrealistic. But to put it in the words of a famous future Ex-President: The Sun will also rise tomorrow, and Mr. Hawking has promised another 1.000 years to mankind.

Our view on the probability of these events:

CUBA BACK to USSR: not probable

Europe Must Not Die!

Good Morning to the New Normal.

Italy has voted to remain in a political deadlock and to protest against the ugly truth of necessary reforms. Austria and the shatters of the European old guard are celebrating the defeat of the Austrian (Far-)Right with a convincing (?) 53-47 score, while the country itself remains hugely divided. In the mean-time the RealDonald has decided to save on the US diplomatic corps and to solve all urgent international matters by President-elect Tweets. But no worry, if things turn sour, the European Central Bank is ready to drown us in ever more money and to punish any type of cash hoarding or positive bank balances.

Stock and Currency markets take account of this new normalcy, major stock indices and the Euro rise. One is inclined to keep calm and think “So What?”. In reality we are witnessing the rapid dissolution of the European Union, and if politicians do not find fast any common and stable ground to put the European institutions onto, the noble-prize of peace awarded project will soon be history, blown away in an ugly, and un-controlled way. Of course there is rightfully some “Angst” going around, but things might in the end turn out much better than what they look like, and this is perhaps what financial markets already predict. An old wisdom is saying, “You have to face reality, before you can shape the future”.

Political leaders in line with an un-critical media/press (in Europe often still state financed), both in the US and in Europe, have lived in denial over major realities for a very long time and branded everybody either populist or extremist, who was naming these realities. However, the broader population has a very sensitive feeling for these realities, and is turning more and more to the people who name these realities, although in most cases they have no answers to these realities, too. Let us share at least some of these Lord Voldemort type of realities (“You Know Which realities”), that have been systematically denied over the last 10-15 years:

Once the ugly truths are digested and acknowledged, we will realize that the future is bright. First, Europe is much more than the European Union, and the friendship and respect and interrelations between the countries are enormous and lasting, and that vast diversity is the real asset of the continent. Second, there is a real chance, that we re-discuss the areas in which more integration is needed (like defense, fight of terrorism, border protection, climate control), and the areas where less integration can do a lot of good (daily life, monetary policy, taxation).

Let us not forget, that Europe is not the European Union, it is the European idea of peace, friendship and diversity, stability of borders and human rights that make up Europe.

State of the Nation Comments Off on Europe Must Not Die!