The very dynamic year 2018 comes to an end and the events of this year will shape the coming decade and beyond. We are witnessing a rapid transformation and disruption of our global word order, and the end-game of the domination of Western-style democracies.

Main events of the past 12 months

Other important events in 2018 included the (official) start of Genetically Modified Humans (GMH) in China, the Mueller investigation and economic and reputational cracks in technology giants like Apple, Google, and Facebook.

We had dared to make a series of forecasts for 2018 at the end of last year – some in stark contrast to banks and other analysts. Without going into the details and the reasoning, the review shows as follows:

Now to the more important look into the crystal ball of 2019 developments:

The good news: (1) there are many ways to invest successfully during recessions, every risk is an opportunity; (2) nobody can claim that there were no warnings; (3) the catharsis is needed prior to any new lasting and healthy upswing.

And finally, the sectors on which we are bullish for 2019:

We wish you a great, successful and healthy start into 2019!

State of the Nation Comments Off on The BIG Short: Fast Forward Into Recession

VI2 Partners is happy to share with you our recent newsletter on the most important developments and economic trends in Ukraine. 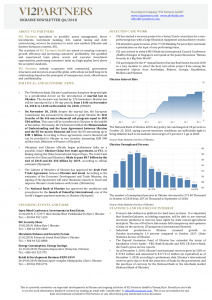